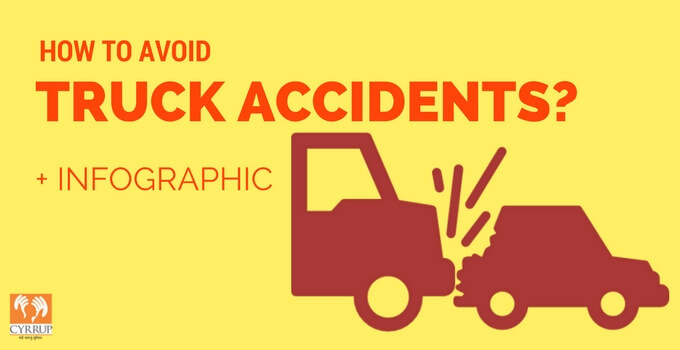 Truck Accidents happen because of reasons that can be ruled out in the first place – over speeding, drunk driving and driving without following traffic signals. According to official statistics on vehicle accidents, 17 fatalities occur each hour.

As for the causes of vehicles accidents, speeding seems to be the prime suspect. Others include talking on cell phone while driving vehicles. Speeding is said to have caused as many as 66.5% of the accidents, and 61% deaths, use of cell phone led to lower than 5000 accidents and more than 2000 deaths.

In this article, we’d discuss briefly the prime causes of Truck Accidents in India.

Conditions that cause Truck Accidents

In general, drivers fail to maintain the speed limit when it comes to National Highways or State Highways.

Official estimates put speeding is the largest cause of Truck Accidents in India. In 2014, 57,844 deaths, amounting to 41% of the total deaths were due to accidents caused by speeding.

Over speeding happens because of the very human instinct to do better or excel. Thus. it’s sheer aggressive behavior on the part of the driver. However, when it comes to sharing of the road among all, one driver may be behind another.

Under such situation speed of the vehicle is likely to cause a crash. The faster the vehicle moves the severe the accident.

Driving in drowsy condition is likely to cause accidents because under the condition all the inputs including steering, braking and acceleration become erratic, and the driver becomes unable to react to the situation and decision making also becomes poor when driving.

Drowsiness is caused by driver fatigue, which is a major factor leading a great number of accidents. According to the National Sleep Foundation, 51% of adult drivers drove when they were drowsy and 17% fell asleep while driving. Therefore, it’s critical to monitor drowsiness when driving to avoid fatal accidents.

Driving involves staying focused on the job. Even attention lost for a split second can cause heavy loss of life and property.

Using mobile for texting, or, calling, diverts the driver’s attention. Even if the time is very short duration or a couple seconds, it causes a potentially fatal road accident.

An overloaded truck is more likely to cause accidents. This is because the driver is in a poor situation to stay responsive to emergencies. This is the sole factor that can cause an accident.

Overloading reduces the braking system functionality, which means the track takes longer to stop that it should. Sometimes the driver fails to judge the distance rams the vehicle.

Further, if the truck is overloaded it becomes challenging while making turns at corners or changing lanes because of a shift in balance.

Crossing stop signals are often known as red light jumping. In the day-to-day rush to reach early, in the name of saving time becomes a potential condition for accidents.

Research shows that when traffic signals are properly obeyed by all road users, they can save their time and reach their destination safely and on time. Jumping red lights puts the driver’s life at risk as well the others on the road.

The act of jumping signal leads to others to do it. Which results in utter chaos.

How to Avoid Truck Accidents

The Black Box alerts the driver when there is erratic blinking as compared to normal blinking, and thus helps avoid potential Truck Accidents.

Cyrrup Vehicle Black Box helps avoid over speeding by drivers. Whenever the driver so behaves, it sends alerts to the owner of the fleet. This helps the owner getting into contact with the driver and could help avoid a possible accident because of overspeeding.

Keep Safe distance between vehicles on the road

It’s advisable to maintain a distance of 20 to 25 car lengths when the truck is behind vehicles. However, it’s challenging to maintain the distance on roads full of moving vehicles.

The driver while driving has to take into account his vehicle maintaining the safe distance. Further, when the driver is on an uphill road. They should allow more space behind if it’s getting difficult in changing gears.

This can be avoided by equipping the vehicle with an alert system, which can send alerts to the fleet owners regarding driver behavior on Signals, Sharp Turns and Signboard breaking.

Following is an infographic, a visual guide on how to Avoid Truck Accidents.

This site uses Akismet to reduce spam. Learn how your comment data is processed.